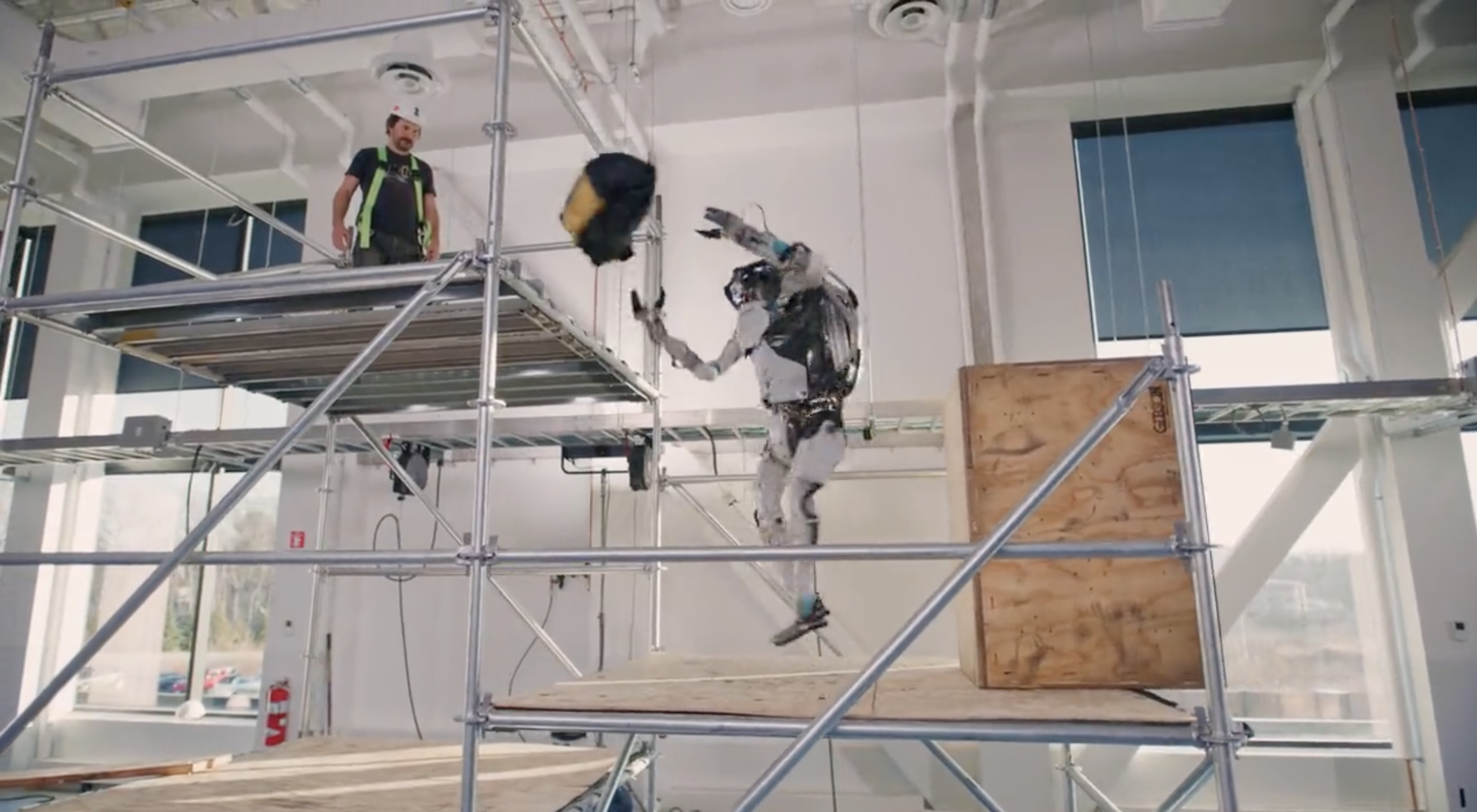 Ahead of the next inevitable round of herp de derp “Skynet iz here” hot takes on social media, Boston Dynamics showed off more of its Atlas robot’s stunning agility and dexterity in a new demo video Wednesday morning. This time, the humanoid machine had to deliver a tool bag to the top of some scaffolding using only its roboparkour powers.

In the video above, Atlas shows a surprising amount of forethought, grabbing and placing a wooden plank across a large gap before heading over to pick up the tool bag itself. From there, it’s a simple matter of climbing a set of stairs, balancing across said plank, hopping up a couple ledges, jump spinning in place to turn around and gently hucking the bag over its head to the platform above. That’s all before it shoves a box off its platform — carefully avoiding not tilting over the side itself and then, “dismounting with an inverted 540-degree flip that project engineers have dubbed the Sick Trick,'” according to Wednesday’s release.

“Parkour forces us to understand the physical limitations of the robot, and dance forces us to think about how precise and dexterous the whole-body motion can be,” Robin Deits, a software engineer on the Atlas controls team, said in that release. “Now, manipulation is forcing us to take that information and interpret it in terms of how we can get the hands to do something specific. What’s important about the Atlas project is that we don’t let go of any of those other things we’ve learned.”

Except none of that is “a simple matter.” At the start of the decade, bipedal robots would wilt if you looked at them sideways, much less asked them to climb a set of stairs. In 2015, robots were still so janky that we ran supercuts of them falling down. And today, they — well Boston Dynamics’ at least, Elon’s robot is barely more than a skinny guy in a suit — can outrun, outjump, and outclimb the average sedentary American. It’s a damn good thing the company, along with six other robotics industry leaders, has pledged not to use its legion of bag-delivery bots for war.

But don’t expect an Atlas to replace your local UPS driver anytime soon (for one, their union would never allow it) because for as impressive as this video is, it took a substantial amount of time and effort to develop. As you can see in the behind-the-scenes video above, Atlas suffered dents, scrapes, scratches, and more than a few tumbles in learning this routine.

“This is more a demonstration of some of the robot’s new control capabilities, and a fun connection to our prior work,” Scott Kuindersma, Atlas team lead said. “Our hope is that, if we can build the foundational technology that allows us to easily create and adapt dynamic behaviors like these, we should be able to leverage it down the road to perform real, physically-demanding jobs with hustle. There are many pieces required to deliver a complete solution in a domain like manufacturing or construction—this video highlights a narrow slice of what we’re working on.” So maybe it isn’t so much the hyper-agile acrobots we need to worry about as it is the EOD machines armed with high explosives and piloted by the cops.